Leeds East Academy's Comic Club members were thrilled to finally meet the writers and illustrators of comics and graphic novels who were nominated for this year’s BCA Young People's Comic Award.

Mrs Dingwall explains: "The British Comic Awards (Young People’s Category) is run in association with Leeds Library and is judged by young people with an aim to celebrate the best comics aimed at a youth audience. The library’s Comic Club have very much enjoyed reading all of the nominated works ahead of voting for their favourite work."

The awards ceremony was held in the grand surroundings of the Lord Mayor’s Banqueting Hall in Leeds Civic Hall. The nominees were impressed as students from Leeds East Academy took to the stage to lead the captivated audience through a comic-jam as Jim Medway (nominated in 2013 for his book Playing Out) supported from the sidelines with tips on how to create a fun comic. Once the giggles had subsided, students shared their amusing and quirky creations.

The spotlight was then turned on to the nominees. Taking turns in talking about their work, technique and inspirations Adam Murphy described how he had meticulously researched information before creating Lost Tales; his illustrated re-telling of lesser-known folk stories from around the globe.

Neil Cameron, nominated for two of the short-listed books, spoke of how he struggled to draw people, so decided to draw robots instead. Self-published Ramzee offered lots of encouragement to young, budding comic creators and Matthew Swan amused everybody with his attempt to explain the wild and weird antics of his creation Paisley Girl in Carrots. There was a huge round of applause when Adam Murphy was announced the overall winner and he looked genuinely surprised when he was presented with this year’s trophy.

"I’ve had a fantastic time!" said Brayanne. "I’ve been so excited about meeting the real-writers!"

The event came to a close as the nominees signed and illustrated students' planners, many with illustrations of the students themselves, much to their amusement.

For more information about the British Comic Awards, visit their website here. 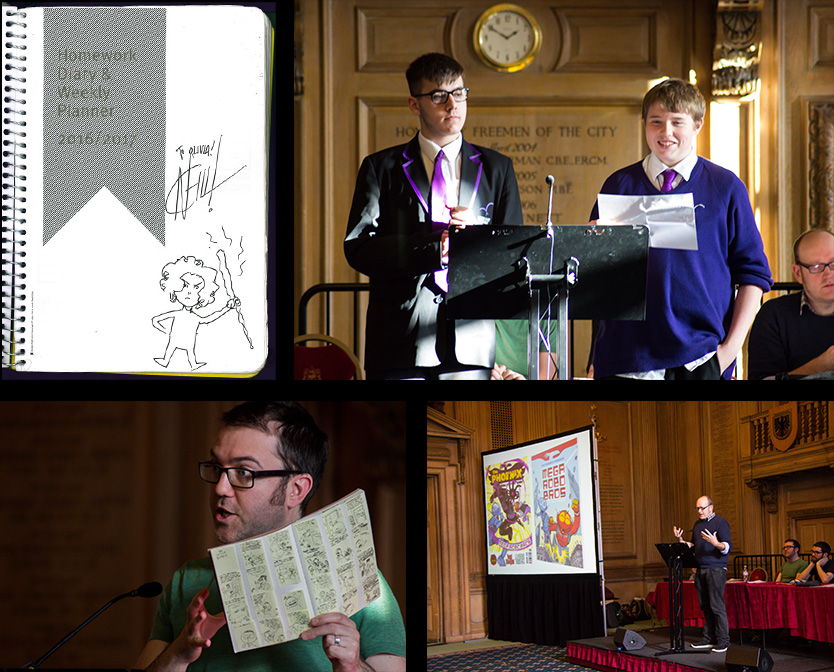